Respect to all victims―European Day of Remembrance for Victims of All Totalitarian and Authoritarian Regimes, Ljubljana, 23 August 2022

On Tuesday, 23 August 2022, Slovenia commemorated the 14th European Day of Remembrance for Victims of All Totalitarian and Authoritarian Regimes. The ceremony, organised by the Study Centre for National Reconciliation (SCNR), the Office of the President of the Republic of Slovenia, the Military Vicariate of the Slovenian Armed Forces and the Cathedral of St. Nicholas in Ljubljana, took place at several locations in Ljubljana. 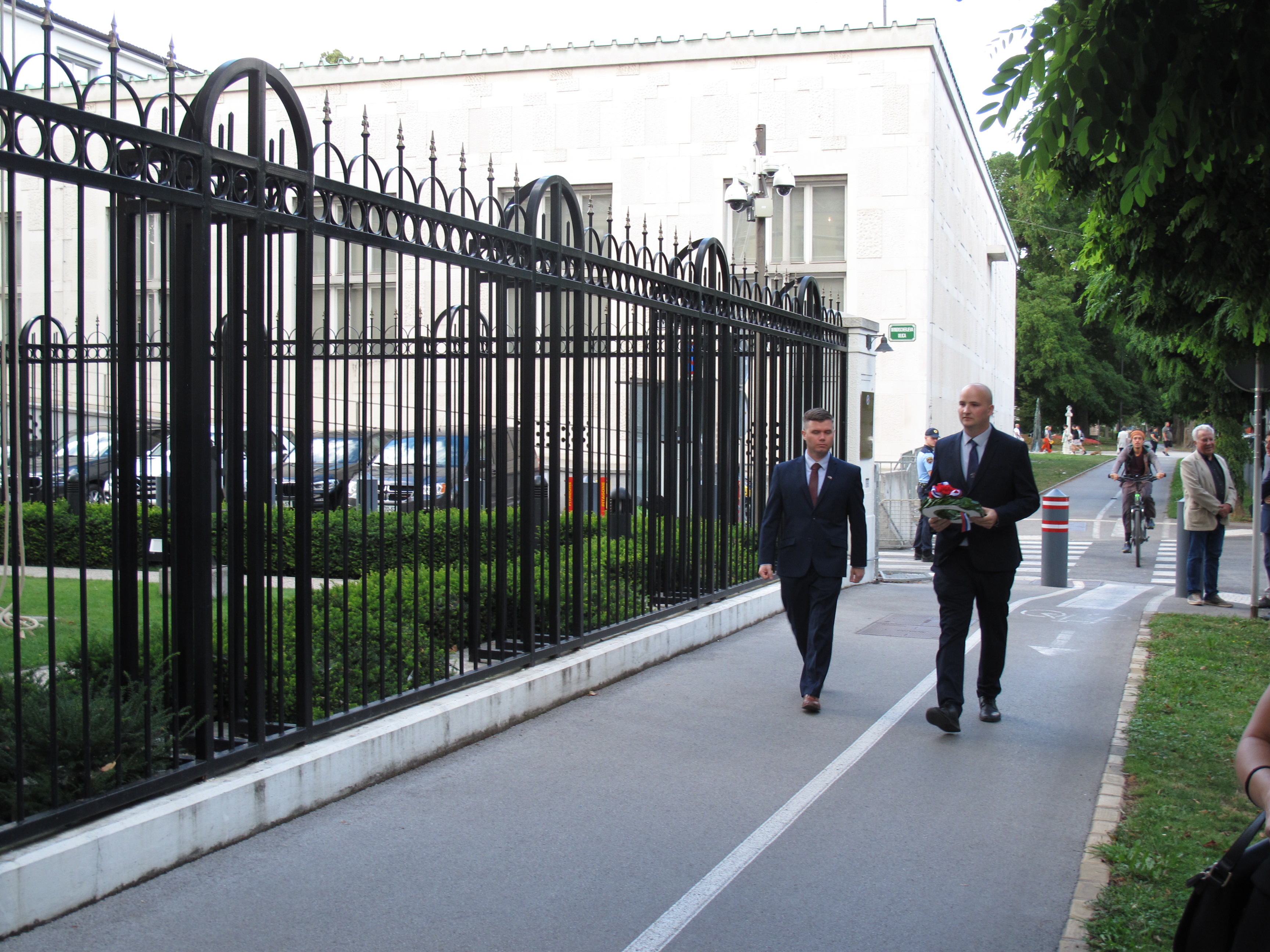 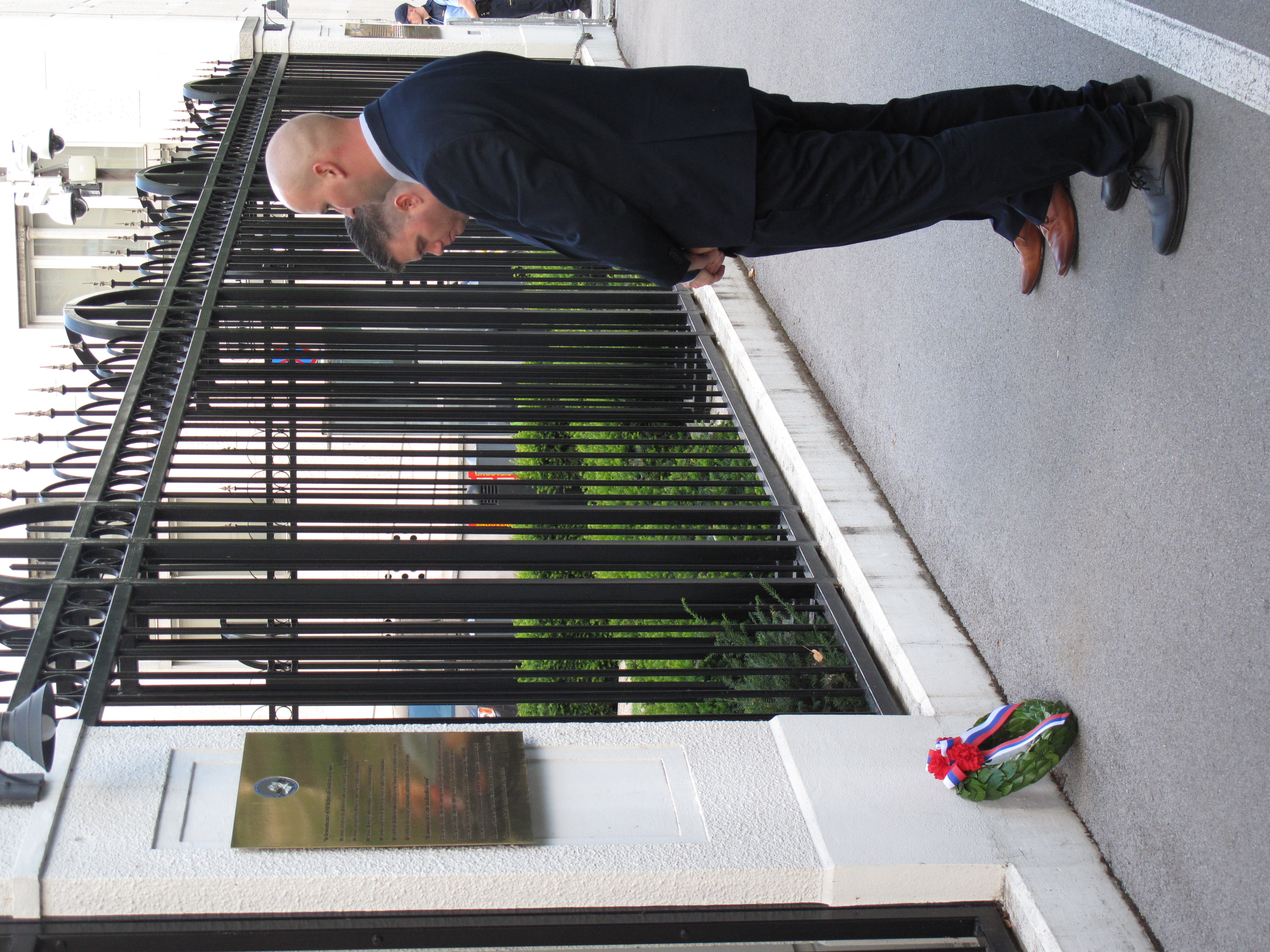 In front of the US Embassy (Director of the SCNR dr. Tomaž Ivešić and Mr. Andrew Kirst). 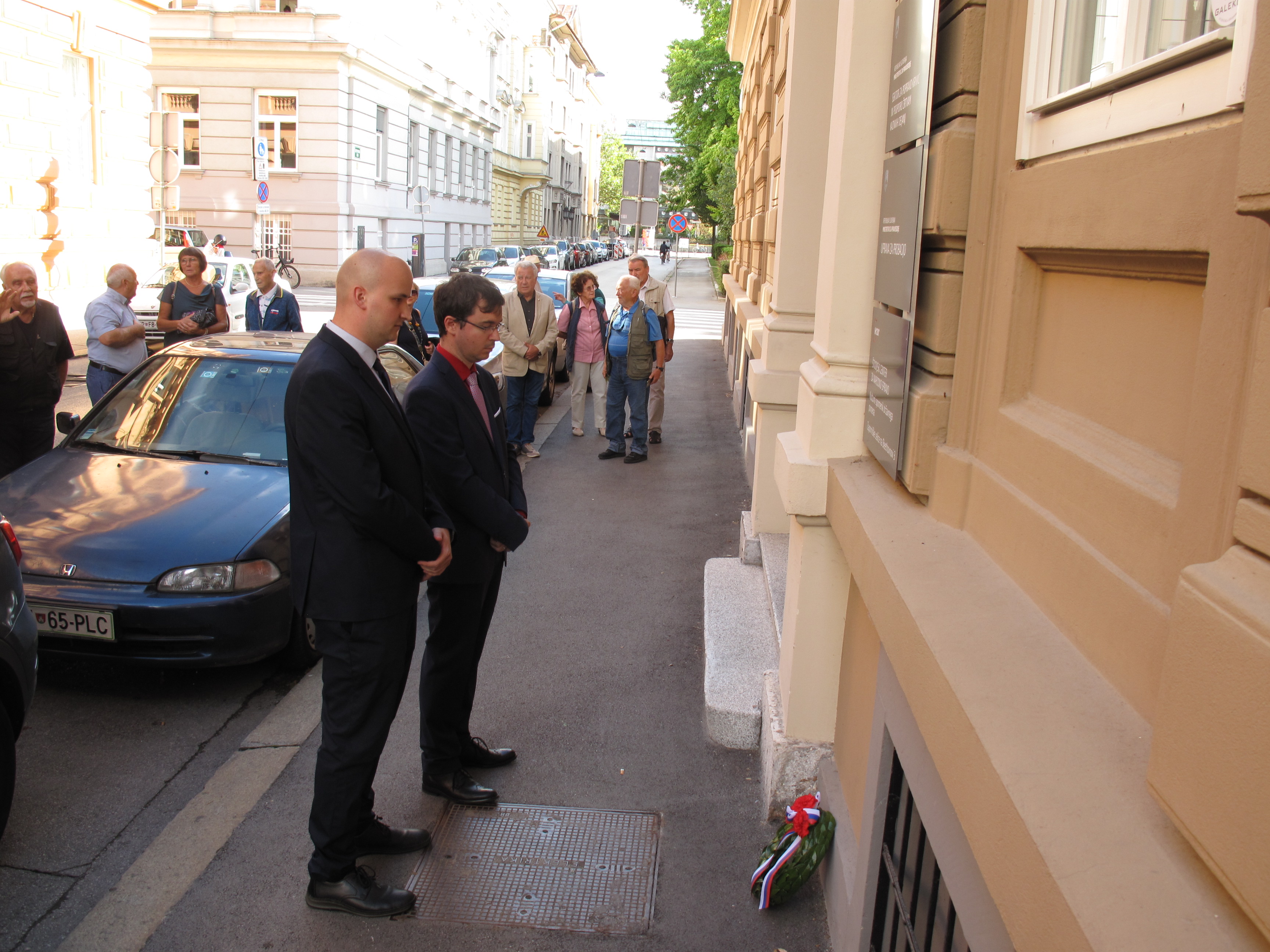 This was followed by a commemorative ceremony at the Monument to the Victims of All Wars at Congress Square No. 2.  There, the President of the Republic of Slovenia, Borut Pahor, delivered a speech and laid a wreath in front of the Monument. The ceremony was accompanied by a rich cultural programme. At the suggestion of the Study Centre for National Reconciliation and at the invitation of President Pahor, this deferential act was witnessed by the high-level representatives of five of the largest religious communities in Slovenia: Catholic Bishop Msgr. Anton Jamnik, Evangelical Bishop Leon Novak, Mufti of the Islamic community in Slovenia Nevzet Porić, Jewish Rabbi Ariel Haddad and Bishop Sava of the Orthodox Church, auxiliary bishop of the Patriarch of the Serbian Orthodox Church. Before the ceremony, at 16:30, the President of the Republic received the high-level representatives of the religious communities at the Presidential Palace.

Video (Office of the President of the Republic of Slovenia): https://media.up-rs.si/ftpmedia/2022-08-23_Slovesnost_DanSpomina.mp4 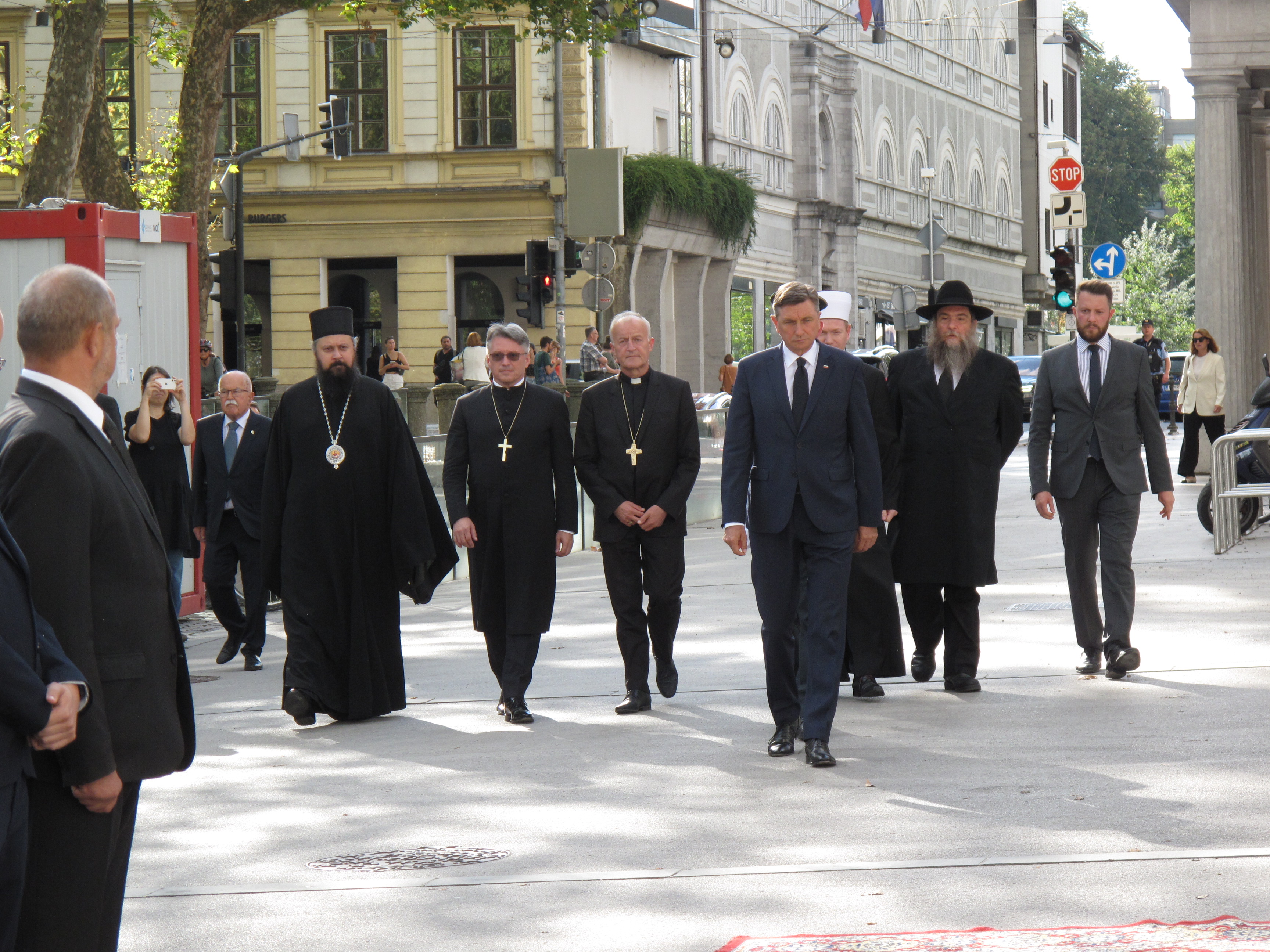 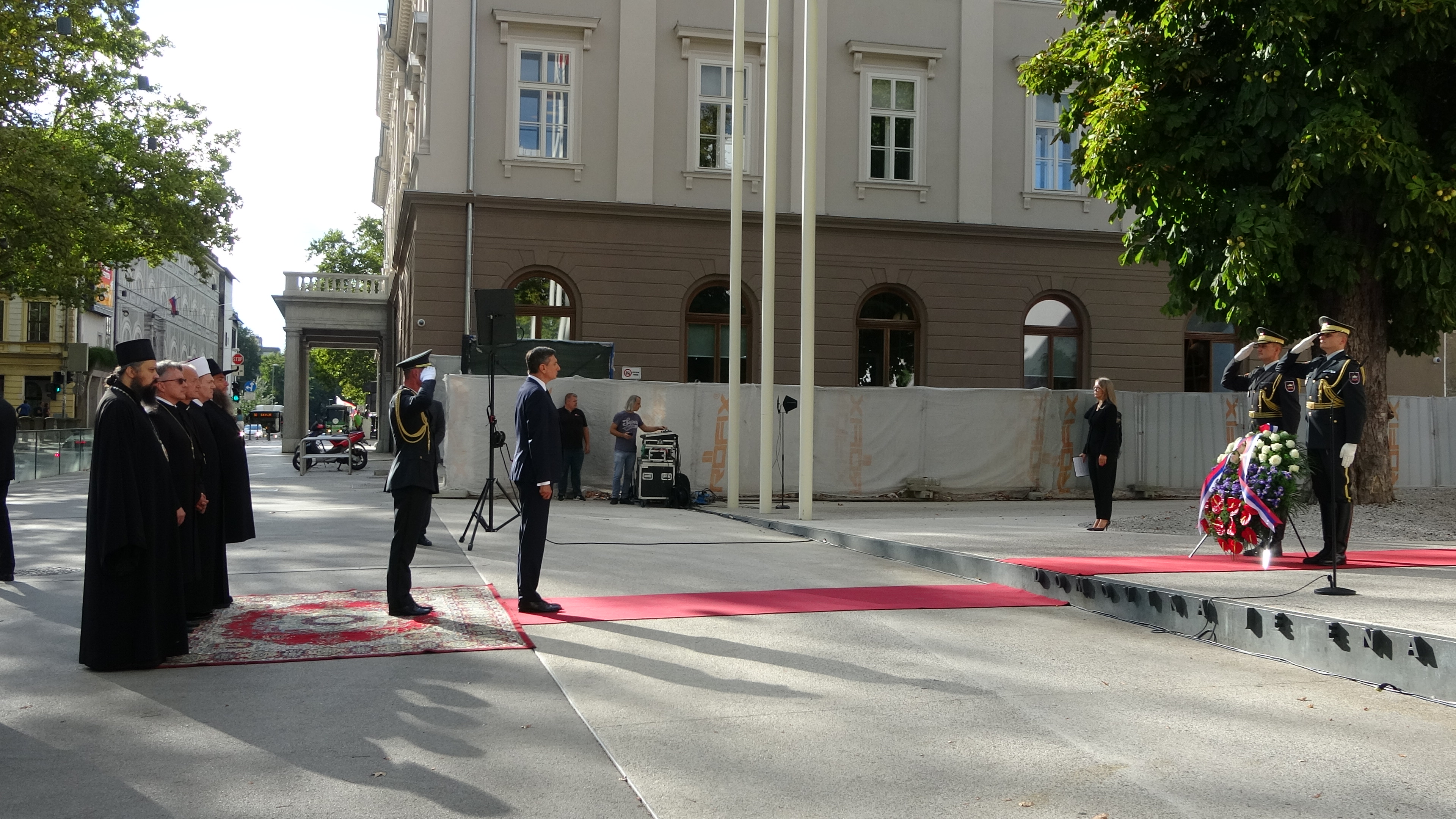 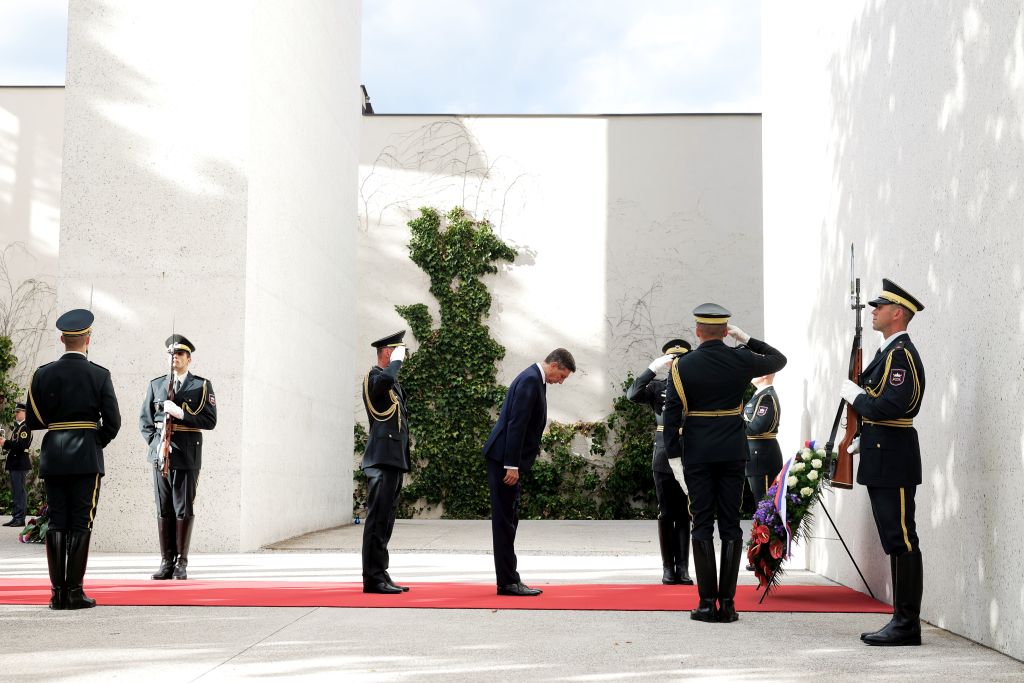 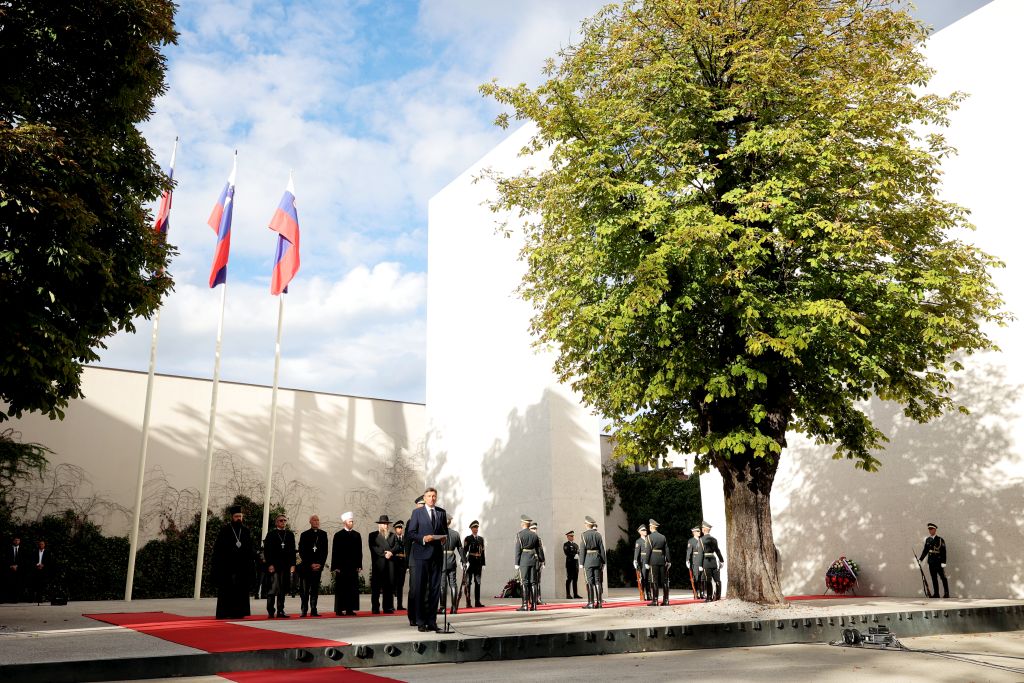 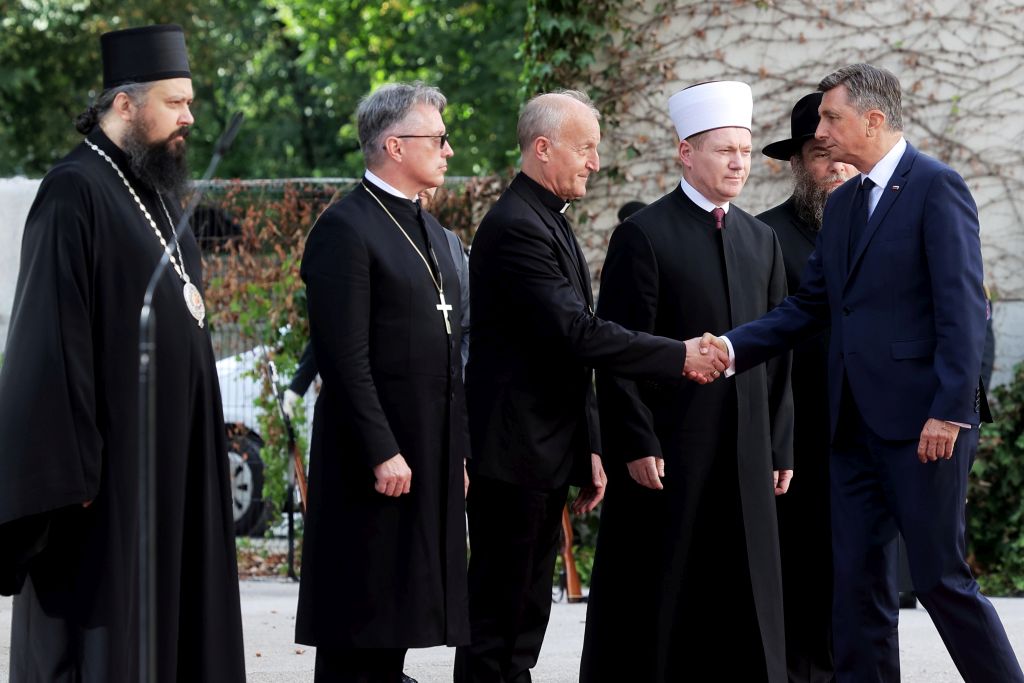 Religious representatives with the President of the Republic of Slovenia, Borut Pahor. (Photo: Daniel Novakovič/STA) 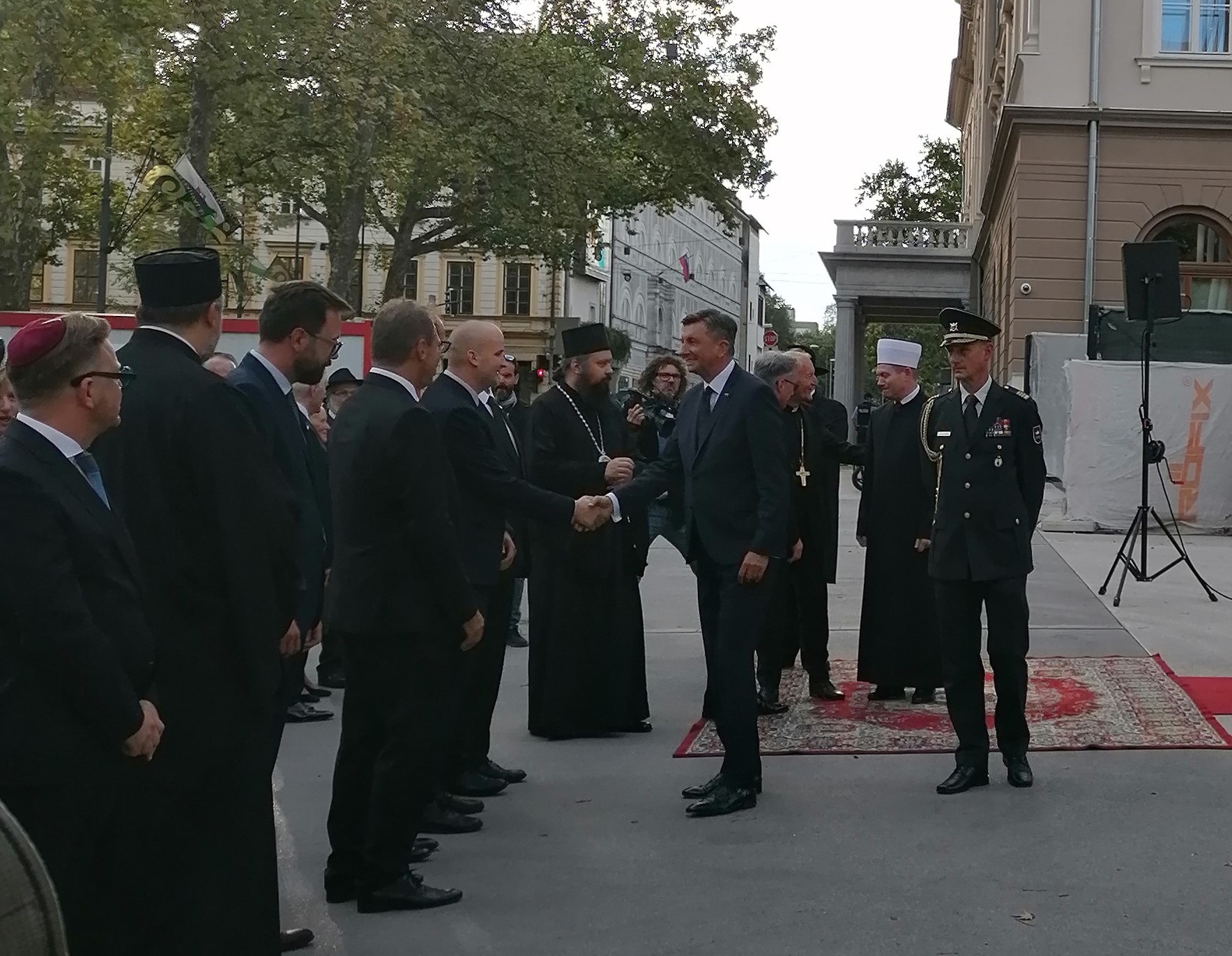 President of the Republic of Slovenia Borut Pahor and the Director of the SCNR dr. Tomaž Ivešić.

At 18:30, a mass was held at the Ljubljana Cathedral, conducted by the Metropolitan Archbishop of Ljubljana, msgr. Stanislav Zore OFM. In his sermon, he drew attention to the evils of totalitarian systems that are alien to the principles of justice, mercy and loyalty. This was followed by a ceremonial event organised by the Military Vicariate of the Slovenian Armed Forces. The keynote speaker at the event was dr. Aleš Maver, historian, Latinist and theologian, associate professor at the Faculty of Arts in Maribor and the Faculty of Theology in Ljubljana. He is active and renowned as a translator, article writer, columnist and political commentator. 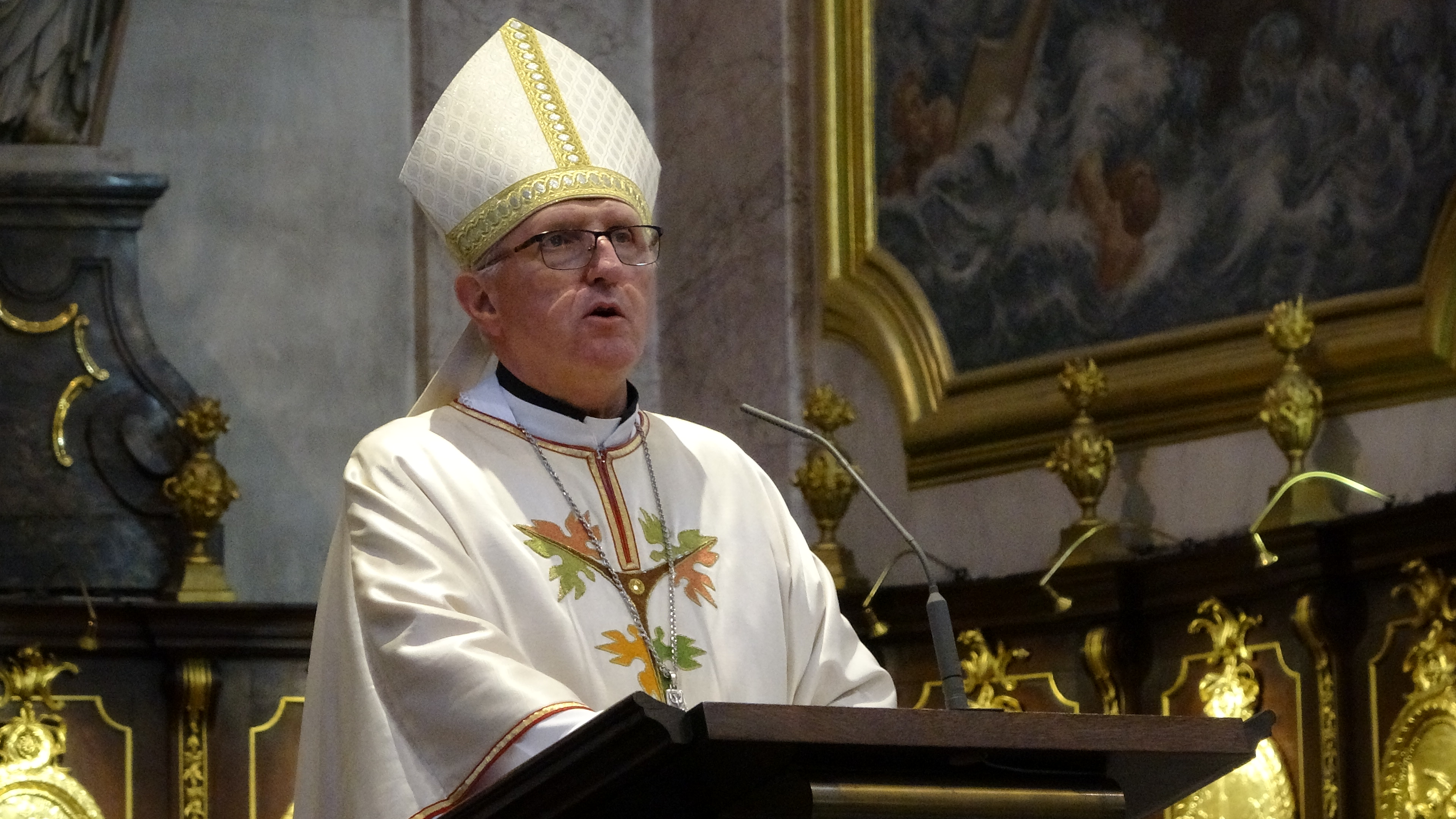 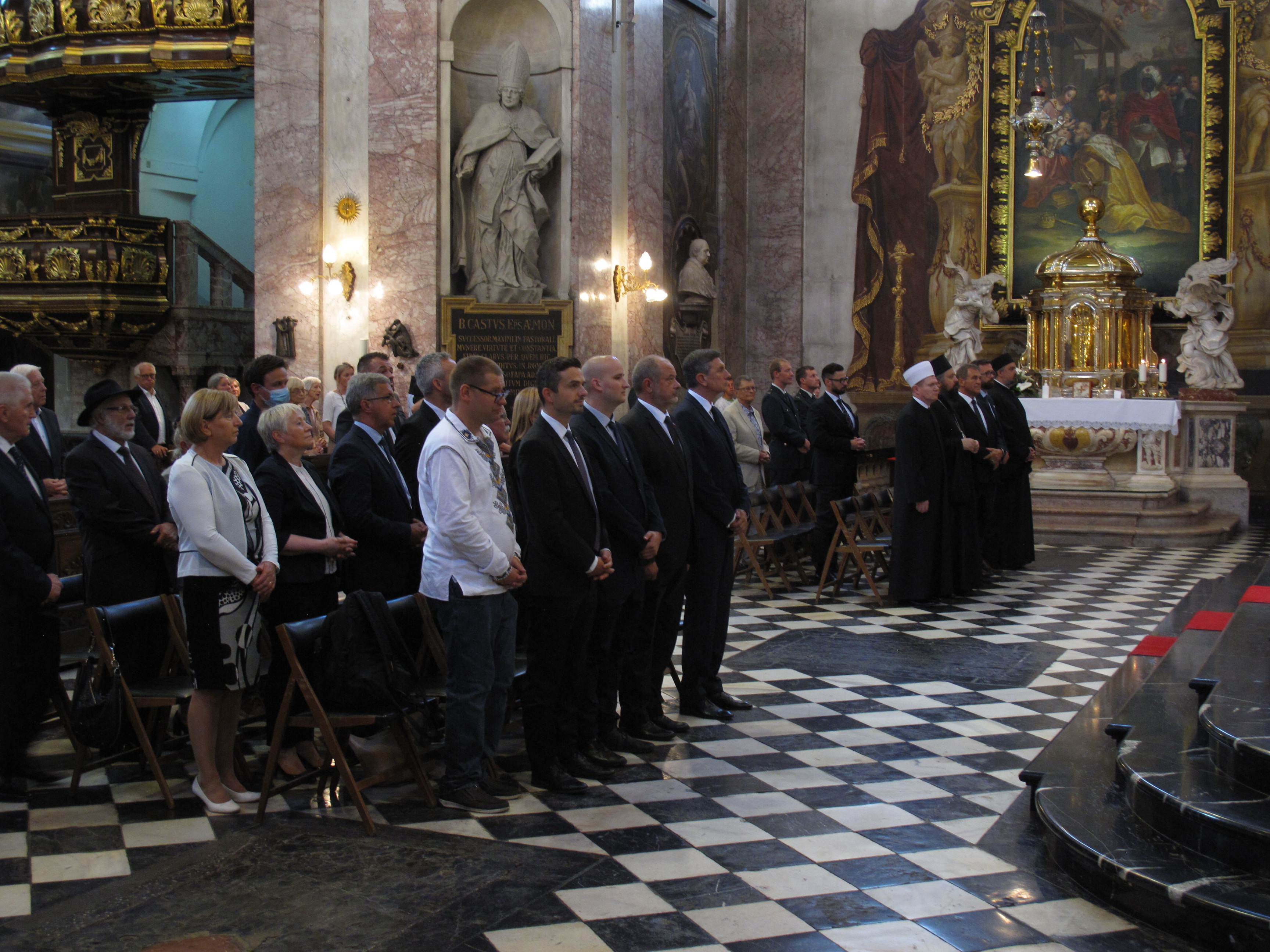 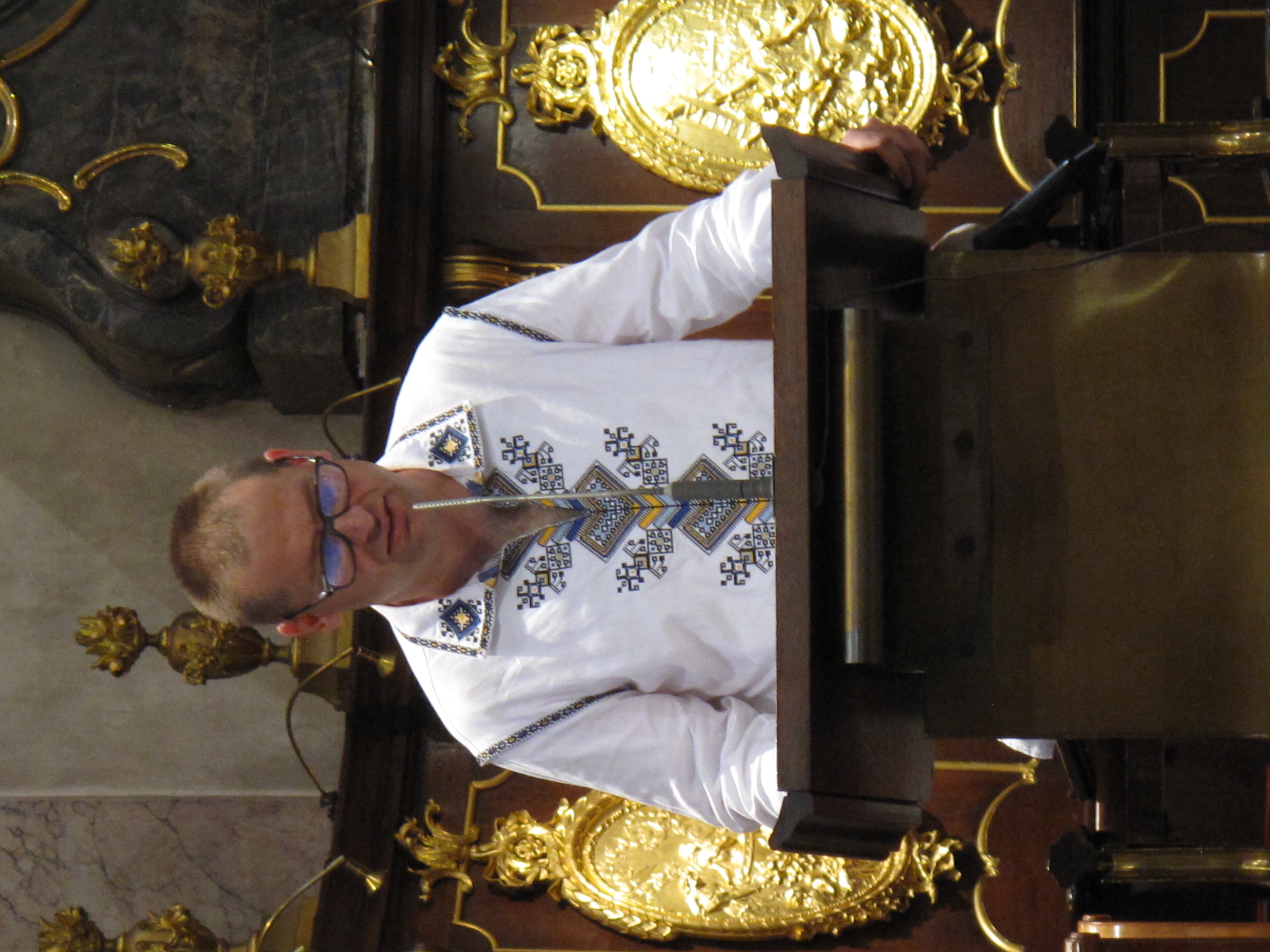 The 20th century Europe and the world were marked by two World Wars, totalitarian and authoritarian regimes, bloc divisions, arms races, espionage scandals and other divisions. On 23 August 1939, a pact was signed between Hitler and Stalin, between the National Socialist Germany and the Communist Soviet Union, leading to the tragedy of World War II and tens of millions of victims. In 2009, the European Parliament declared it a Day of Remembrance for Victims of All Totalitarian and Authoritarian Regimes, and in 2012, the Slovenian government also declared 23 August the Slovenian Day of Remembrance for Victims of Totalitarianisms.

On this day, we call for the remembrance of the victims of mass murder, deportation, imprisonment, concentration and labour camps and other forms of hostility. We encourage the development of democratic values with a view to strengthening the peace and stability of the family of European nations, which must draw a clear line under the totalitarianisms of the 20th century.